Grand Bahama Island is made up of many settlements and communities. Some of these are very small and uninhabited. However, they are an important part of the island as they provide many natural resources and uninhibited beauty. People go to some of these places to fish, skin dive or just gaze at all the natural beauty there. 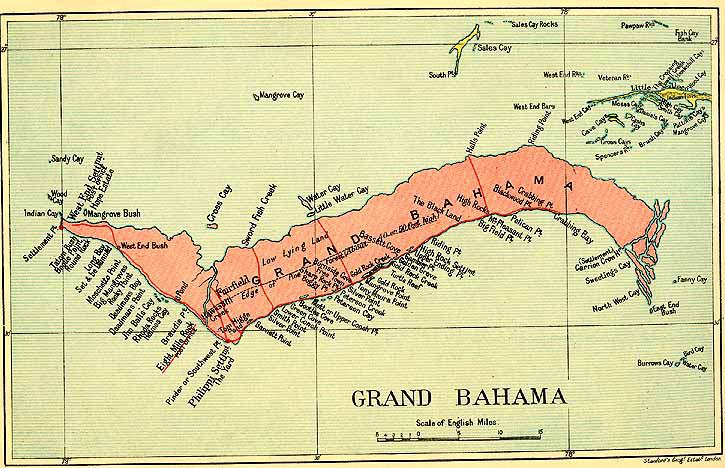 West End is the capital of Grand Bahama Island and the capital. This fishing village located on the western tip of the island is the oldest city on the island. Additionally, it was known as a liquor smuggling town during the prohibition.

This is the home of Paradise Cove where some of the best snorkeling reefs are. Artifacts belonging to the Lucayan Indians were also unearthed recently along the eroding beach front. Dated at around 1200-1300 AD, it is one of the most important Lucayan archaeological sites ever discovered.

This quaint community is over 200 yards in diameter and produces fresh water at low tide and salt water at high tide. It is known for a unique cave that sits behind a local night club.

This is the largest settlement outside of Freeport/Lucaya. It is a string of communities, grouped together, and named after 8 miles of rock contained there.

This town is made up of four connected villages. It has been slow to adopt the American-style culture that came with the tourist trade, even though it lies just minutes outside of Freeport/Lucaya.

This is the second largest city in the Islands of The Bahamas. It is the site of many of the tourist beaches and activities. Additionally, the International Bazaar and Port Lucaya Marketplace are here.

This town was founded by a freed slave by the name of Joseph Williams. Some of his descendants still live there. on what is called “generation land,” because it was settled by one family and ownership of the land was passed on by generation to all members of the family. You will find a boiling hole and an old cemetery in this town.

Smith’s Point is named after Michael Smith, the Scotsman who served in the early 1800s as the Commissioner of the island. A sign at its entrance proudly proclaims, “Smith’s Point–Bahamian Village,” indicating the village’s pride in maintaining its heritage. It is the venue for what has become a Wednesday night tradition on the island — the Fish Fry.

This tiny village consists of quaint houses providing an ironic contrast to the modernity of those within which it is enveloped. Mather Town lies across a channel next to Smith’s Point.

Freetown was the first place where slaves were freed in 1834, hence the name Freetown. The Hermitage in Freetown is considered the oldest building on the island. It was built in 1901 as a Baptist Church and later served as a hermitage for a Trappist monk.

You will find an abundant supply of fresh water at Water Cay. This little island lies in the center of northern Grand Bahama. It was settled about 100 years ago by seven share holding families from Peterson Cay, Freetown, Abaco, and Cat Island.

This fishing village is located 55 miles east of Freeport. has a population of 400 and is accessible by boat only. It stretches about a mile long

This town is named after a 30-foot high rocky bluff between the coastal road and the sea. The village is made up of wood-framed buildings and the people who live here make a living fishing or by working in Freeport or at the Burmah Oil terminal.

McLean’s Town is the easternmost settlement. The people who live here make a living by fishing or by transporting to nearby cays on their ferries. The This town is famous for its Conch Cracking Contest, which is held every year on Columbus Day.

This town is situated on the eastern end of Grand Bahama Island and is accessible only by boat from McLean’s Town. It is surrounded by 250 square miles of shallow sand and mud flats and is known for bone fishing.

This cay lies just east of Sweeting’s Cay and is uninhabited. It is accessible only by boat and is ideal for picnics and snorkeling right off the beach. At low tide, the shoreline becomes a sandy expanse that streches for many yards.