Island History shows the earliest settlers were the Siboney Indians. These were a people who lived off the sea. They were here as early as 7,000 years ago and disappeared when another group, the Lucayans, took over. The Lucayans, or Arawaks, worked their way up the Caribbean from the South American Amazon. They occupied the Islands of the Bahamas when Christopher Columbus sighted San Salvador in 1942. 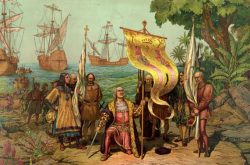 Little is known about the Lucayans, due in part to their extermination by the Spanish after Culumbus’ arrival. After the Lucayans were enslaved and transported to Hispanola, Cuba and Margarita, near Trinidad, the Spanish paid little attention to Grand Bahama Island.

Great Britain claimed The Islands of The Bahamas in 1670. Ports and colonies gradually developed, bringing along an army of pirates and privateers. By 1720, the crown had successfully established control over the pirates, and the island probably saw a lot fewer visitors thereafter. They lay largely undisturbed for the next 200 years.

Up until the mid-nineteenth century, Grand Bahama Island had largely been left alone by the outside world. In 1861, with the Advent of the American Civil War, the flow of people began to grow, and the population doubled quickly. 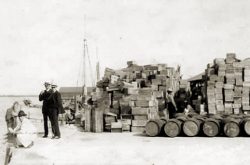 When the war broke, The Confederacy of Southern States, which was just 55 miles offshore, immediately fell under a strict Union blockade and embargo. Getting goods such as sugar, cotton, and weapons in and out of the Confederacy was essential to the war effort, and smugglers operating out of West End were able to command high prices from the South. However, when the war ended so did the boom, but the short-lived prosperity set an important tone. Ever since, the island history of Grand Bahama Island was intrinsically tied to that of the United States.

The next smuggling boom came from alcohol. The demand for alcohol was high at the time. Yet it was banned and prohibited. Prohibition brought warehouses, distilleries, bars, supply stores, and inns to West End. The islands prospered once again. However, as soon the US solved its problem, the economy dove once more. People started to fish again.

In 1955, there were no resorts, no casinos, no tourism on the islands. Grand Bahama was one of least developed of The Islands of The Bahamas. Then came man named Wallace Groves, an American financier from the state of Virginia who had been on the island since the mid-1940s. Grove owned a lumber company and was saw the possibilities of the island becoming a tourist destination. After all, United States, with its thriving post-war economy, was just a hundred miles away. Americans were already flooding Cuba on their vacations. Groves believed that Grand Bahama could be an alternative to the overcrowded beaches and casinos of Havana. As a result, in 1955, with the agreement of the Bahamian government, he began a to build a town that catered to both industry and tourists. Upon the signing of the Hawksbill Creek Agreement, Freeport was born.

Over 30 years later, Grand Bahama Island is a community completely tailored to the getaway tourist, a premeditated paradise offering almost every kind of vacation activity imaginable.

To this day, Tourism is the mainstay of Grand Bahama island thanks partly to the Port Lucaya resort area and cruise ships visiting the island. Also, Grand Bahama’s tourism sector is complemented by the BORCO oil bunkering facility, the South Riding Point oil storage and trans-shipment terminal and a transshipment/container port owned in part by the Grand Bahama Port Authority. A quarrying operations on the island and a large shipyard also contribute to the island’s economy.

There are four airports on the Island: